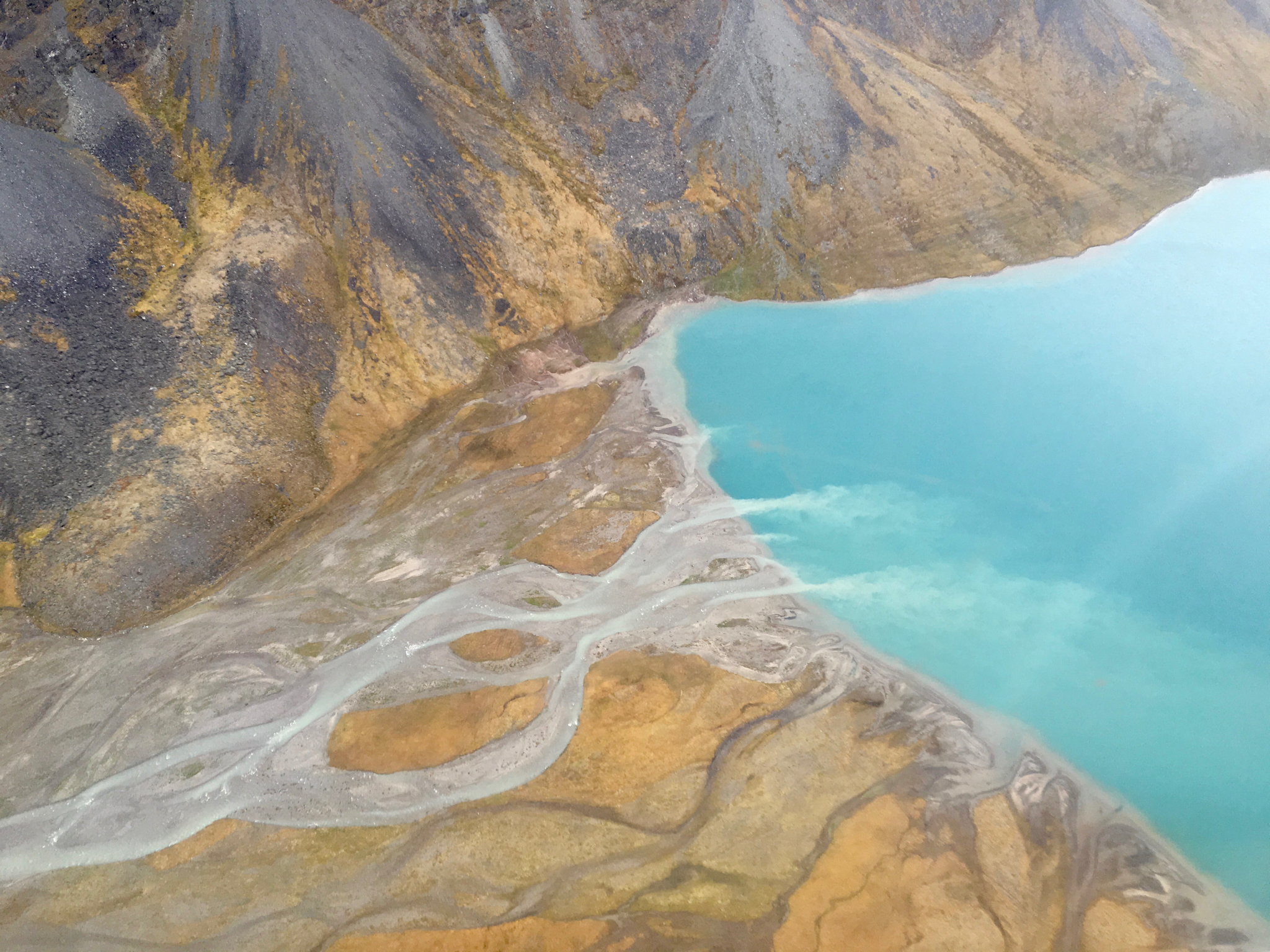 This project aims to better understand how river discharge, fluvial suspended sediment concentration (SSC), and lake thermal conditions influence sediment dispersion within Lake Peters. During the summer of 2015 fluvial inputs into Lake Peters, including SSC and water temperature, were monitored every 30 minutes for nearly three months. The turbidity and temperature of Lake Peters were measured regularly at sub-meter depth intervals across the lake. In addition three moorings located along the long axis of the lake were equipped with sensors, recording water temperature at different depths, at hourly or sub-hourly resolution. We observed overflows that were quickly transformed into interflows as the density of fluvial inflow changed with water temperature and SSC. During an exceptionally high discharge event in August, a sediment-rich underflow quickly propagated along the lake bed and was later transformed into an interflow as the SSC decreased by apparent settling of the coarser particles. Our results also show that not all sediment pulses reach the distal basin. These data sets highlight the variety of spatial sediment transfer patterns in Lake Peters from one fluvial event to another.

Seasonal suspended sediment transfer in glaciated catchments is responsive to meteorological, earth surface, and glacier-stream conditions, and thus is a useful indicator of environmental system dynamics. Knowledge of stream sediment-transfer processes is limited in the Arctic–a region sensitive to contemporary environmental change. For two glaciated sub-catchments at Lake Peters, northeast Brooks Range, Alaska, we conducted a two-year endeavor to monitor hydrology and meteorology, and used these data to derive multiple-regression models of fluvial suspended sediment load for the 2015 and 2016 open-channel seasons (Figure below). We also undertook a lake-based study, for which we constructed spatial models of sediment dry bulk density based on distance from the primary inflow to the lake and lake water depth. We used the spatial models to calculate average sediment yield over ca. 42 years to improve our understanding of catchment-scale sediment transfer and gain knowledge of within-lake processes. Using both methods, specific suspended sediment yields (i.e. suspended sediment mass per unit of catchment area, annually) to Lake Peters were in the order of 50 Mg km-2 yr-1. During 2015 and 2016, suspended sediment transfer to Lake Peters was primarily influenced by rainfall, and secondarily influenced by temperature-driven melt processes. Although 2016 was a year of above average sedimentation, the last extreme depositional event at Lake Peters probably occurred between 1970 and 1976 when a basal lens of fine sand was deposited.

Paleoclimate reconstructions are essential to contextualize recent warming that is affecting the Arctic region faster than anywhere else on Earth. To better understand this rapidly changing landscape, sedimentological evidence from Lake Peters and Lake Schrader in the northeastern Brooks Range was used to infer changing environmental conditions over the past 16,000 years (16 ka). Across five core sites, distinct changes in the visual stratigraphy and physical sediment properties including sediment bulk density, organic-matter content, and grain-size distributions record changing environmental conditions. The oldest sediments accumulated rapidly and contain little organic matter, interpreted to represent a landscape dominated by paraglacial processes and the rapid upvalley retreat of glaciers. No robust evidence was found for a climate fluctuation concurrent with the Younger Dryas. A peak in organic-matter abundance between 12–10 ka is attributed to a maximum in orbitally driven insolation and accords with other regional paleoclimate reconstructions. Following this, conditions appear to have become drier as indicated by sediments with high density and low organic content until 5 ka. From 5–2 ka, organic matter consistently increases in several cores and is attributed to increased river discharge, which carried terrestrial organic matter into the lake, or to increased summer temperatures, which led to higher productivity, or both. After 2 ka, sediments increase in density and decrease in organic content, which suggest the growth of glaciers within the catchment. Moraine mapping and lichenometry confirm previous studies and accord with changes in lake sediments. Rhizocarpon geographicum thallus diameters on boulders located on the outermost moraine crest suggest the maximum Holocene glacial extent is associated with increased moraine frequency from elsewhere in the Brooks Range dating to 2.5–1.9 ka. New measurements from a distinct moraine crest from an additional valley show consistency within the basin and are likely associated with a regional increase in moraine frequency from 1.1–1.0 ka. Increased sedimentation rates and organic productivity in both lakes may record glacier retreat during the last century. This study provides a framework for future research and fills an important gap in paleoenvironmental records for the northeastern Brooks Range.

The glaciers of Arctic Alaska serve a crucial ecological role, regulating streamflow between precipitation events and delivering nutrient-rich sediment to streams and lakes. As global warming melts glaciers and changes precipitation regimes, it is particularly important to understand the hydrological inputs that compose streamflow in quickly evolving Arctic basins. This research will use stable isotopes to constrain relative contributions of rain, snow and glacial melt to Lake Peters, with the objective of contributing to a predictive hydrological model. Lake Peters is an ideal location for a hydrograph separation study because of its numerous inflows that range from completely non-glacial to primarily glacial runoff, allowing for comparison across subbasins. Deuterium and oxygen will be used in a volumetric mixing model with summer precipitation and winter-accumulated melt as end members. While summer precipitation is enriched in heavy isotopes and winter precipitation is depleted, there are several other factors that affect meteoric isotopic composition, such as source water and distance traveled. HYSPLIT storm trajectory modeling will be used to distinguish seasonal isotopic differences from other types of isotopic fractionation.